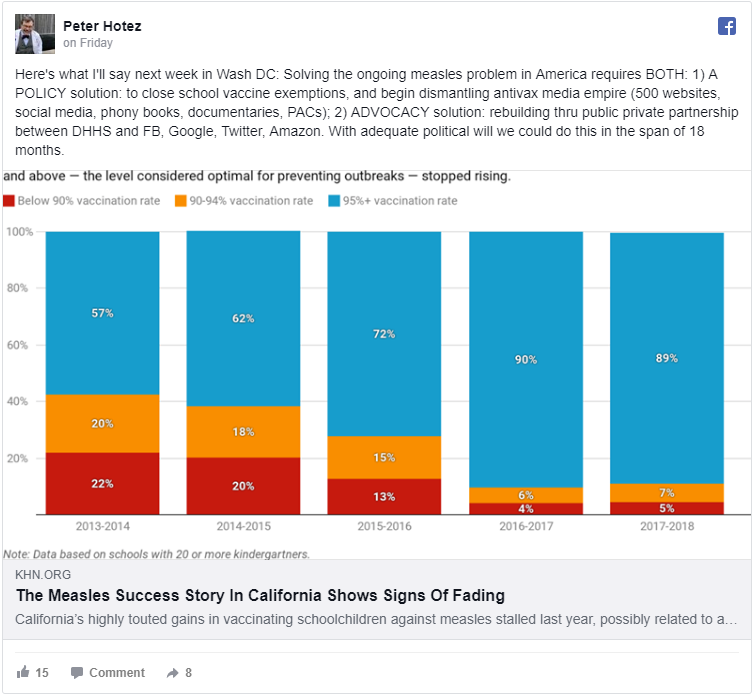 Think Facebook has an anti-vaxxer problem? You should see Amazon  In November 2012, the Welsh city of Swansea was hit by a unusually destructive measles outbreak. Sparked off by a handful of children who picked up the virus after returning from a holiday camp, over six months the epidemic would would infect at least 1,202 people and lead to the death of one 25-year-old man. But the seeds of the Swansea measles epidemic were sown 16 years earlier. In July 1997 a local Swansea newspaper, the South Wales Evening Post, ran the first article in a campaign questioning the safety of the MMR vaccine, which protects against measles, mumps and rubella. In areas where the Evening Post was distributed, the number of people receiving the MMR vaccine declined from 91 per cent before the campaign to 77.4 percent afterwards. While it is impossible to draw a conclusive link, one thing was certain: by November 2012 the number of young people in Swansea who had no protection against measles at all was dangerously high. 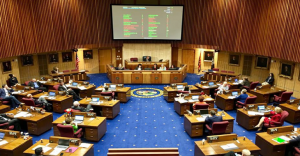 Disregarding health warnings, Arizona lawmakers move forward on vaccine exemptions for kids Disregarding warnings by public health officials, an Arizona legislative panel on Thursday endorsed three bills that critics say will erode immunization coverage among Arizona schoolchildren. The House Health and Human Services Committee approved all three bills in contentious 5-4 votes that were split along party lines, with Republicans favoring the measures and Democrats voting in opposition. Several critics pointed out measles outbreaks across the country and said the three bills could make Arizona more vulnerable. One local doctor said the panel was sending a message of vaccine skepticism even though the science says vaccines are far safer than the diseases they prevent. “Do we want the next outbreak news story to be in Arizona?” Dr. Steven R. Brown, a family physician in central Phoenix, asked the committee. “As a family physician who cares for the health of our citizens and especially our children, I am disheartened and frightened that this is up for debate. … Nobody is here to tell the stories of people who are alive and not disabled by vaccine-preventable illness.”

Hi RSB, this is Chuen.  I’ve asked you questions before.  This time is about occipital neuralgia.  Could you tell me if there’s a way to get rid of this condition without surgery?  I’m having stabbing pain several times a minute.  The pain lasts about 5 seconds.  But it’s intense.  I had this condition years ago.  It went away slowly.  I recently had a flu which brought on this condition.  I can’t sleep because of the pain.  It’s driving me crazy.  Please advise.  Thank you. 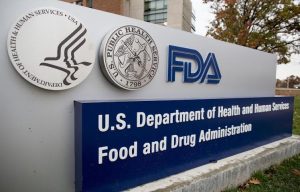 Opinion: Why an FDA overhaul of dietary supplement industry is critical Federal Drug Administration Commissioner Scott Gottlieb, recently proposed several regulatory and communication initiatives that he said would lead to “one of the most significant modernizations of dietary supplement regulation” in nearly three decades. C. Michael White, department head and professor of pharmacy practice at the University of Connecticut, responded to that proposal on Healio, a site for medical news and information for physicians and health care practitioners. The dietary supplement world is a murky place where you spend your money on a product that may or may not have any active ingredient in it, may not contain the promised dosage or concentration of the active ingredient, or it might include adulterants and contaminants. 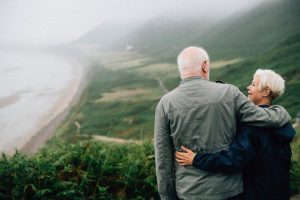 51% Of Seniors That Have Tried CBD Report An Improved Quality Of Life Over Christmas while I was visiting family in North Carolina I had a surprising amount of older friends and family members approach me with questions about CBD. Now that CBD is legal across the country, more and more people are starting to consider incorporating it into their own wellness routine, and more and more of those people are seniors. A recent study of 1,000 seniors ages 54 and up by Remedy Review found that 9% of seniors have tried CBD health-related reasons and 51% of those that have tried it reported having an improved quality of life afterward. Over 65% of the seniors surveyed that tried CBD said that their quality of life was good, while only 31.1% said the same before trying CBD. As for how those seniors are taking that CBD, many prefer drops. A whopping 54.4% of the seniors surveyed that had tried CBD did so by putting CBD drops directly in their mouth. 21.1% of the serious opted to put those drops in a beverage instead, and another 21.1% got their CBD through CBD-infused edible. 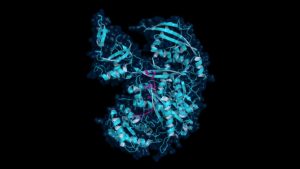 Bacteria In Our Guts May Be Communicating With Our DNA, Study Shows Bacteria in the gut may be able to boss around the genes found in their hosts – at least, in worms. According to a new study published in the journal Cell, trillions of bacteria found within the average gut may be practicing a sort of “interspecies communication” that transcends language. Gut bacteria secrete a molecule called nitric oxide. In an attempt to understand how bacteria communicate with its host, researchers tracked nitric oxide levels inside tiny worms (C. elegans). They found that this molecule is capable of attaching to thousands of host proteins and, as such, changed the worm’s ability to regulate its own gene expression. And if it works in worms, there is a possibility similar activity could be happening within our own stomachs. Previous research has shown that nitric oxide attaches to human proteins in a process known as S-nitrosylation, which has been linked to diseases like Alzheimer’s, Parkinson’s, asthma, and cancer, among others. 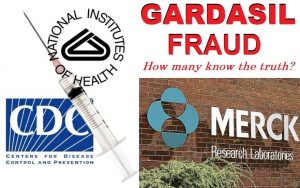 States Move to Mandate Deadly HPV Gardasil Vaccine for Children Pharmaceutical giant Merck’s political influence is now reaching beyond the CDC and federal government, and moving into state legislatures as several states have introduced bills to mandate Merck’s Gardasil HPV vaccine for children. The HPV vaccine, which only applies to sexually active people, is not currently part of the CDC vaccine schedule, therefore separate legislation is needed to compel children to receive it. What is withheld from the public is the fact that Merck is fighting fraud cases in U.S. courts and multiple other lawsuits around the world concerning the Gardasil vaccine, as the vaccine continues to kill and injure, primarily teenage girls. Here are the states currently considering new legislation to mandate the Gardasil vaccine against parental choice. (Note: Merck’s Gardasil vaccine is the only HPV vaccine currently licensed in the U.S. So when you read “HPV Vaccine,” that currently means Gardasil.)

Connecticut: SB 858 – Allows for administration of HPV and Hepatitis B Vaccines to minors without parental consent. Public Hearing 02/25/19.

New Jersey: A1847 – Mandates HPV Vaccines for students in grades six through 12.

New York: (2 bills) A973/S3899 – Allows health care practitioners to administer HPV/Hep B Vaccines to minors without parental consent. And S298 – Mandate the HPV Vaccine to the current list of vaccines required for children. 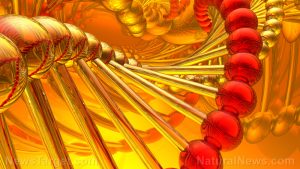 ome personal beliefs and morals may stem from genetics A new baby is often welcomed with speculation aboutwhether they got their eyes and nose from mom or dad, but researchers say it may be possible for children to inherit their parents’ moral characteristics, as well. The researchers found that while parents can help encourage their children to develop into responsible, conscientious adults, there is an underlying genetic factor that influences these traits, as well. Amanda Ramos, Training Interdisciplinary Educational Scientists fellow at Penn State, said she hopes the study can help start a conversation about how and why these characteristics—referred to as “virtuous character”—develop. “A lot of studies have shown a link between parenting and these virtuous traits, but they haven’t looked at the genetic component,” Ramos said. “I thought that was a missed opportunity because parents also share their genes with their children, and what we think is parents influencing and teaching their children these characteristics may actually be due, at least in part, to genetics.”

Autism Defined: Facts On Autism Join Dr. Rashid A. Buttar for an Advanced Medicine webinar that will introduce a new breakthrough addition to an already highly successful treatment protocol for Autism. Dr. Buttar believes this could be the single greatest innovation and one of the most fascinating and cutting edge advances on the planet today to help stop and change the course of Autism. Learn about the Actual, Proven Solution to Autism with a 20+ year track record with thousands of patients from all over the world as living proof of the results!

1. Proven and Effective Treatment Protocol Used Over 20 Years with Patients from 89 Different Countries
2. FREE Access to the RAP-TD Tool
3. Details Of A Cutting Edge, New Breakthrough Addition to the Proven Treatment Protocol
4. Access to “Autism Defined: Facts on Autism” Program for a 95% discount from the actual value