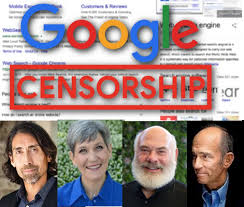 Self-Interested Whims of the Oligarchs: Google and Facebook Kill Access to Alternative and Integrative Medicine The blog post to which my attention was called was entitled When Big Brother Went High Tech. The news from energy medicine author Lynn McTaggert jerked attention of the integrative community to a story I’d long anticipated: Google’s censors turned their attention to the still wild political-economical-medical frontier of “alternative medicine”. Osteopath and internet businessman Joseph Mercola reported that 99% of the traffic to his sometimes pugnacious mercola.com “natural health” website was killed. “Integrative medicine” was not spared. Visits to the much more tame Dr. Weil site from that field’s godfather dropped 66%. In an August 2019 e-blast to his list of Minnesota holistic practitioners on Google’s incendiary actions, an integrative leader of 40-years Bill Manahan, MD writes: “”I think you will find it pretty scary for those of us in the integrative, alternative, and functional medicine fields.” 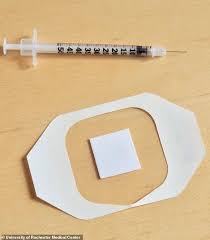 The end of the flu jab? Scientists create a stick-on patch which may protect against the viral illness as effectively as the traditional vaccine A patch placed on the skin could protect against flu as effectively as the traditional vaccine, research suggests. For decades scientists have tried to find an alternative to flu jabs, which can cause patient anxiety, have to be administered by a medical professional and create biohazard waste. University of Rochester experts now believe they have made a breakthrough, after testing their creation on mice. They admitted one of the biggest setbacks is getting flu molecules across the skin’s hardy barrier, which keeps substances out. The new patch – around the size of a standard plaster – contains synthetic proteins that make the skin more ‘permeable’, as effectively as a flu vaccine. Trials on mice showed the patch ‘initiated a robust immune response’. And the rodents showed no increased risk of infection over the next three months, suggesting the patch did not permanently affect their skin barrier. The team stress, however, more animal studies need to be carried out, with the patch hopefully being tested in human trials ‘in the future’. 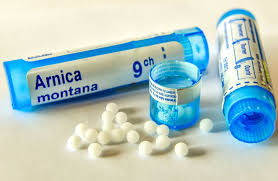 Homeopathic treatment has been dismissed as quackery by doctors — so why do people keep taking the medicine? Homeopathy is the Marmite of alternative medicine. It’s “gentle and safe – yet effective”, according to TV personality Jo Wood, one of several celebrities offering an enthusiastic endorsement on the British Homeopathic Association website. She “always” used it for her children, who now use it for theirs, she explains. Or it’s “tap water masquerading as medicine”, Simon Stevens, chief executive of NHS England said recently. It’s “witchcraft”, says the British Medical Association (BMA). Developed in the 1790s by the German physician Samuel Hahnemann, homeopathy was tolerated as a quirky but harmless treatment for nearly two centuries in the UK. Globally, it is used regularly by up to 200 million people, notably for chronic conditions including allergies. Of these, an estimated six million live in the UK, according to the Homeopathy Research Institute. Yet over the past decade it has become a byword for medical quackery around the world. 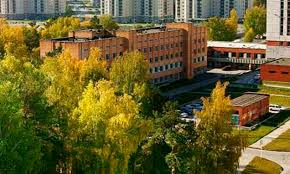 Gas explosion rips through Russian laboratory containing smallpox, Ebola and HIV viruses A fire caused by a gas explosion has torn through a Russian laboratory that houses viruses including smallpox, Ebola and HIV. Russia claims there is no sustained threat after a gas cylinder exploded on the fifth floor of the State Research Centre of Virology and Biotechnology, known as Vector. Located in Koltsovo, in the Novosibirsk region of Siberia, the site was a nexus for biological warfare development during the Soviet era. One worker was left with second and third degree burns and had to be taken to hospital after the blast, which blew out the windows at the facility. Vector is one of two places in the world where the smallpox disease is stored, the other is at a high-security laboratory – the US centre for Disease Control in Atlanta. According to RT, authorities scrambled 13 fire engines and 38 firefighters to tackle the blaze – which the lab claims covered 30 square metres. The mayor of Koltsovo has claimed that no biologically hazardous materials were released in the explosion. 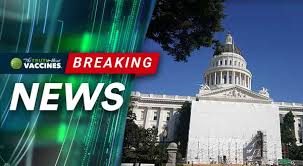 SB 276: California Passes New Restrictive Vaccine Laws… Who’s Really Calling the Shots? Last night citizens held a candlelight vigil outside the California State Capitol. Parents, teachers, and children continued a demonstration against California Senate Bills 276 and 714, both of which will enact drastic and oppressive changes to vaccination requirements. Protests continued throughout the day on Friday and show no signs of slowing down. On Monday, California Governor Gavin Newsom signed both bills into law after majority approval by both the Senate and the Assembly. Protestors stood on chairs and shouted from the balconies signaling the beginning of what has been a week-long demonstration. Activists shut down both chambers of the California state legislature, filling the halls and creating a human barrier around the government buildings. 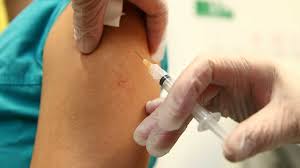 California Passes Stringent New Vaccine Requirements But Voters May Get Final Decision California’s governor signed a first-of-its-kind bill late last week, dramatically limiting — if not completely erasing — exemptions to the state’s mandatory vaccination law for children. Some California residents, however, who say that the bill represents a shocking governmental overreach that threatens their personal autonomy, are pushing to have the law included on the November ballot. NBC News reports that California Governor Gavin Newsom signed a package of bills designed to “crack down on doctors who write fraudulent medical exemptions for school children’s vaccinations,” in order to re-establish California’s falling childhood vaccination rate, which has given rise to a number of outbreaks of preventable diseases — including the measles — over the last several years. 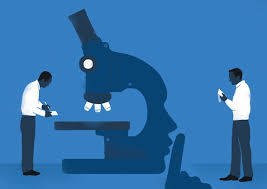 How the FDA Manipulates the Media It was a faustian bargain—and it certainly made editors at National Public Radio squirm. The deal was this: NPR, along with a select group of media outlets, would get a briefing about an upcoming announcement by the U.S. Food and Drug Administration a day before anyone else. But in exchange for the scoop, NPR would have to abandon its reportorial independence. The FDA would dictate whom NPR’s reporter could and couldn’t interview. “My editors are uncomfortable with the condition that we cannot seek reaction,” NPR reporter Rob Stein wrote back to the government officials offering the deal. Stein asked for a little bit of leeway to do some independent reporting but was turned down flat. Take the deal or leave it. NPR took the deal. “I’ll be at the briefing,” Stein wrote. Later that day in April 2014, Stein—along with reporters from more than a dozen other top-tier media organizations, including CBS, NBC, CNN, the Washington Post, the Wall Street Journal and the New York Times—showed up at a federal building to get his reward. Every single journalist present had agreed not to ask any questions of sources not approved by the government until given the go-ahead. 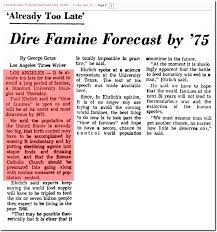 Wrong Again: 50 Years of Failed Eco-pocalyptic Predictions Modern doomsayers have been predicting climate and environmental disaster since the 1960s. They continue to do so today. None of the apocalyptic predictions with due dates as of today have come true. What follows is a collection of notably wild predictions from notable people in government and science. More than merely spotlighting the failed predictions, this collection shows that the makers of failed apocalyptic predictions often are individuals holding respected positions in government and science. While such predictions have been and continue to be enthusiastically reported by a media eager for sensational headlines, the failures are typically not revisited. 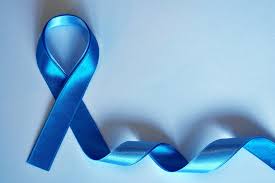