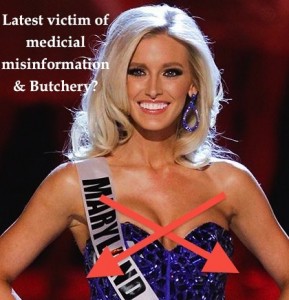 Allyn Rose, 24, has announced she’ll have a double mastectomy after the Miss America pageant is over.

She doesn’t have cancer.

“If I were to win [the contest]…I would have this incredible platform  to speak to my generation…” Rose said.

Rose has been making the rounds of media outlets, announcing her intention, promoting what can only be called the culture of self-mutilation.

The case of Allyn Rose goes even beyond that.  She has received no diagnosis of cancer.  This is now a growing trend: precautionary mastectomies.

Rose has been called a carrier.  She is without symptoms.

Medical literature claims a high correlation between this Wiskott-Aldrich marker and cancers.  But breast cancer specifically?

The director of the Wiskott-Aldrich foundation, Dr. Sumathi Iyengar, told the Washington Post’s Reliable Source there was only some anecdotal evidence pointing to a possible connection

I spoke with Dr. Iyengar and she was much more emphatic, stressing  there is “no evidence” proving a link between the Wiskott-Aldrich marker and breast cancer.

On this basis, a healthy young woman of 24 is having both her breasts removed; she has been hailed as a hero; and she will go on the road and function as a promoter for her cause.

Naturally, Allyn Rose is working with the Susan Komen Foundation, notorious for its propaganda about the need for mammograms and “early diagnosis” and treatment.

What message will Rose be sending to young impressionable girls who want to gain status, recognition, and praise?  The answer is obvious.  Suddenly, popularity and acclaim are just one surgery away.

Major media outlets are playing along, of course.  Where are the medical reporters raising objections?  Nowhere.

4 thoughts on “Astounding: Miss America contestant will have both breasts removed, and she doesn’t have cancer by Jon Rappoport”