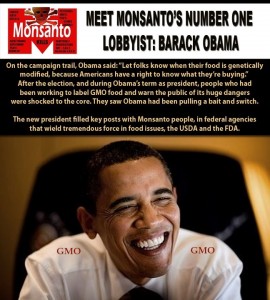 Under the selective radar of mainstream media, Barack Obama has been carving out a whole new level of support for Monsanto and other destructive biotech giants.

“At the G8 Summit held two weeks ago at Camp David, President Obama met with private industry and African heads of state to launch the New Alliance for Food Security and Nutrition, a euphemism for monocultured, genetically modified crops and toxic agrochemicals aimed at making poor farmers debt slaves to corporations, while destroying the ecosphere for profit.

“But African civil society wants no part of this latest Monsanto aligned ‘public private partnership.’ Whatever will the progressives do now that their flawless hero has teamed up with their most hated nemesis [Monsanto] to exploit an entire continent like they did to India not that long ago?…

“With a commitment of $3 billion, Obama plans to ‘partner up’ with mega-multinationals like Monsanto, Diageo, Dupont, Cargill, Vodafone, Walmart, Pepsico, Prudential, Syngenta International, and Swiss Re because, as one USAID representative says ‘There are things that only companies can do, like building silos for storage and developing seeds and fertilizers.’

“Of course, that’s an outrageous lie. Private citizens have been building their own silos for centuries. But it’s true that only the biowreck engineers will foist patented seeds and toxic chemicals on Africa.”

Under the guise of replacing the “donor-recipient model” of charity with “smart business development that’s a win-win for everybody,” a new level of corporate-government colonialism is aimed at the continent of Africa. The new and improved strategy means bigger profits for the few and greater suffering and displacement for the many.

Support self-sufficiency for the small farmer? Expand the number of small farms growing nutritious and non-toxic food? Never heard of it. Not on the agenda—except in false propaganda statements and promises.

No, instead, the idea is putting small farmers into debt to Monsanto for GMO seeds and highly toxic herbicides, so they can grow (until they go bankrupt) noxious GMO food crops. Small farms will eventually be snapped up by big ag corporations.

Obama? A warrior against corporations on behalf of the people? It’s long past the time for ripping that false mask away.

During his 2008 campaign for president, Barack Obama transmitted signals that he understood the GMO issue. Several key anti-GMO activists were impressed. They thought Obama, once in the White House, would listen to their concerns and act on them.

These activists weren’t just reading tea leaves. On the campaign trail, Obama said: “Let folks know when their food is genetically modified, because Americans have a right to know what they’re buying.”

Beyond that, Obama was promising a new era of transparency in government. He was adamant in assuring that, if elected, his administration wouldn’t do business in “the old way.” He would be “responsive to people’s needs.”

After the election, people who had been working to label GMO food and warn the public of its huge dangers were shocked to the core. They saw Obama had been pulling a bait and switch.

After the 2008 election, Obama filled key posts with Monsanto people, in federal agencies that wield tremendous force in food issues, the USDA and the FDA:

ATryn, an anti-clotting agent from the milk of transgenic goats.

This is an extraordinary parade. It, in fact, makes Barack Obama the most GMO-dedicated politician in America.

You don’t attain that position through errors or oversights. Obama was, all along, a stealth operative on behalf of Monsanto, biotech, GMOs, and corporate control of the future of agriculture.

We are talking about a president who presented himself, and was believed by many to be, an extraordinary departure from politics as usual.

Not only was that a wrong assessment, Obama was lying all along. He was, and he still is, Monsanto’s man in Washington.

To those people who fight for GMO labeling and the outlawing of GMO crops, and against the decimation of the food supply and the destruction of human health, but still believe Obama is a beacon in bleak times:

Jon Rappoport
The author of three explosive collections, THE MATRIX REVEALED, EXIT FROM THE MATRIX, and POWER OUTSIDE THE MATRIX, Jon was a candidate for a US Congressional seat in the 29th District of California. He maintains a consulting practice for private clients, the purpose of which is the expansion of personal creative power. Nominated for a Pulitzer Prize, he has worked as an investigative reporter for 30 years, writing articles on politics, medicine, and health for CBS Healthwatch, LA Weekly, Spin Magazine, Stern, and other newspapers and magazines in the US and Europe. Jon has delivered lectures and seminars on global politics, health, logic, and creative power to audiences around the world. You can sign up for his free emails athttp://www.nomorefakenews.com