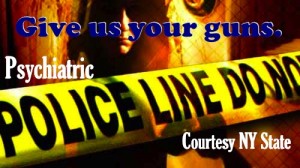 Governor Cuomo, along with Democrat and Republican legislators, is ramming through a bill to restrict gun ownership, re-classify weapons in order to ban them—and, in a far-reaching move, create psychiatrists as cops who must report patients to law-enforcement, in order to keep the patients from owning a weapon.

Psychiatrists must report patients “who could potentially harm themselves or others.”  If such a patient owns a gun, it will be confiscated.

This means a comprehensive data base, accessible by law-enforcement personnel and anyone else involved in doing background checks  These “problematic” patients will be kept from buying a new weapon, too.  Otherwise, the law would have no teeth.

As usual, the devil is in the details.  Psychiatrists will err on the side of caution and report many patients.  No shrink wants to blink into television cameras after one of his patients has just shot his father.

Patients who want to own weapons will lie to psychiatrists about their thoughts and feelings, never admitting they’re considering suicide or murder.

After such a murder, a psychiatrist will say: “He never said anything about killing anybody.  Here, look at my notes.  There’s nothing there.”

For this and other reasons, such as the existence of the data base, doctor-patient confidentiality will go out the window.

Therefore, the practice of psychiatry, which already minimizes talk therapy and merely dispenses drugs, will move even further in that direction.  Tight-lipped patients, who don’t want to go on a police list, will seek an office visit with the sole motive of obtaining a drug.

Since all the emphasis is now on “mentally ill patients who are prone to violence,” the possibility of indicting the drugs in violence will recede over the horizon.

SSRI antidepressants (Prozac, Zoloft, Paxil, etc.) and other brain drugs do, in fact, cause people to go crazy and commit violent crimes, including murder.  This is an open secret in the psychiatric profession, and the public is becoming more aware of it every day.

But it will be swept under the carpet.

Under the new law, a psychiatrist can’t be prosecuted for failing to report a patient who later commits murder, as long as the psychiatrist “acted in good faith.”  The meaning of that phrase is broad enough to automatically cast blanket exoneration on most shrinks, which closes off the chance a psychiatrist will be pilloried for prescribing a drug he knows can induce violence in the patient.

This New York law will be copied and passed by other states, and in the end, we will see a national data base of psychiatric patients.

The official attitude will be: anyone who sees a psychiatrist is a potential killer.

This will give rise to protests on behalf of “a new underclass”: psychiatric patients.  Advocates will arise to take up their cause.  Court cases will abound.  The whole business will devolve into a complete mess.

But out of it will come a hands-on partnership between cops and shrinks, who’ll march should to shoulder into their version of a psychiatric police state.

Seventy-two hour mandatory holds in psych wards for “observation” will expand.  During this period of incarceration, shrinks will dose inmates hard with drugs, in order to make them more docile, because no psych ward wants to be accused of releasing a patient who then goes on to kill people.

Drugs to subdue the mind in that way are very powerful.  They are called anti-psychotics, or major tranquilizers.  As has been shown, they induce tremors, which are signals of motor brain damage.

We can expect to see hundreds of thousands more people, perhaps millions, who are damaged, permanently, by these drugs.

The motto will become: destroy the patient, before he can destroy others.

As the crown on all this, people who have ever professed political ideas outside the mainstream, and so end up in a database of “potential threats to the State,” can be kept from owning a weapon, merely by finding a way to get them into a psychiatrist’s office, on any pretext.  Once there, the psychiatrist can report them as prone to harming themselves or others, and that will function as a bar to possessing a gun.

New York has just created a door that swings in both directions.  A huge number of people who are seeing psychiatrists can be kept from gun ownership.  And people who can see with their eyes what this country has turned into can be turned, on cooked-up technicalities, into psychiatric patients.  Once in the system, they, too, can be denied all 2nd Amendment rights.

It will undoubtedly be called “The 2nd Amendment Exclusion.”

Coming to your neighborhood.