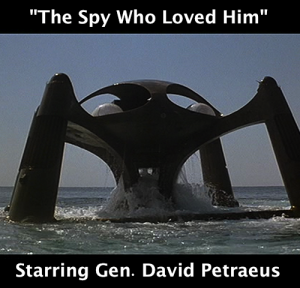 It’s absurd to think the FBI just found out about CIA Director Petraeus’ affair with Paula Broadwell, his biographer.  The timing is too convenient.

The FBI knew about the affair some time ago and, under strict orders, kept their mouths shut until just after Election Day.  If they hadn’t, the scandal would have blown up during Obama’s campaign run.

During the period the FBI knew about Petraeus’ affair, they also knew he was completely vulnerable to blackmail.  In FBI and CIA circles, to have done nothing about it is considered treasonous.  Putting a gag on these FBI people had to been done by the White House.

The latest word is that Petraeus will not testify before Congress about what really happened in Benghazi.  He “may be called” on the carpet at a future time, which could mean never.

His absence will help conceal details of the Chris Stevens murder and the build-up of US-sponsored terrorists in the Benghazi sector of Libya.

In fact, Petraeus’ initial statements to Congress, behind closed doors on September 14, led legislators to believe that absurd film trailer was the cause of the “uprising” at the house where Stevens was attacked and killed.  Was the General’s ridiculous declaration made under orders from the White House, who had the blackmail goods on him?

Then, finally, on October 26th, Petraeus, perhaps fed up at how he was being used by the White House to provide cover for the president, stated: “No one at any level in the CIA told anybody not to help those in need [in Bengazi].  Claims to the contrary are simply inaccurate.”

In this whole scenario, we would be looking at a potential case of double blackmail.  First by the White House, who knew of the affair sometime ago, and second, by whoever might have wrung CIA and military secrets out of Petraeus because they knew about his affair with Broadwell.

What does that make Paula Broadwell.  In intelligence parlance, she would be a classic “honey trap.”

By circumstance, by accident, or on purpose?

She has a long military background.  A graduate of West Point, she directed counter-terrorism studies at Tufts University.  She worked with the FBI Joint Terrorism Task Force.  She is no innocent.

She very well knew that, during the time of their extended affair, Petraeus was vulnerable to any number of blackmail vectors.  This did not make her waver.

She knew this wasn’t just some fling with a lieutenant colonel or even a run-of-the-mill general.  Petraeus was head of all forces in the Afghanistan war.  Then he was CIA director.

There are a lot of ways to write a biography that don’t involve sleeping with the subject and opening him up to blackmail at a very high level.

People from both sides of the aisle in Washington are expressing deep sorrow that an American hero had to resign.  What nonsense.  They’re building cover for Petraeus.  They’re intentionally avoiding the question of what compromises he may have agreed to during his peak military service and intelligence directorship.

In Afghanistan, Petraeus was Obama’s choice to replace Stanley McChrystal, the general who blew his career during a Rolling Stone interview in which his men took pot shots at the president.

It is quite fair to ask whether Petraeus served as Obama’s man in Afghanistan under the unspoken but implied threat that, if there were any kerfuffles, any deviations, any criticisms of the White House Afghan policy, Petraeus’ affair would become public knowledge.

Despite claims by a friend that the affair with Broadwell began after Petraeus assumed leadership of the CIA, there is a strong possibility it started earlier, when Broadwell was “embedded” with the general in Afghanistan.

Was Paula Broadwell covertly working for the White House during her affair with Petraeus?  Was she working for somebody else?  Did she start out as an agent?  Was she drawn into becoming one because she, too, as a married woman, was open to blackmail?

The public and the mainstream press, playing the part of “oh isn’t this too bad but of course nothing really serious or weird or compromising could have happened here,” doesn’t want to know how the spy game is actually played.  They’d rather watch Jeopardy and pop Zoloft.

“Two people, both married, couldn’t resist a great passion.  It happens.  All of us make mistakes.  We understand.  Even great men can succumb.  And she was obviously smitten.  What a shame.”

Petraeus, the man, is now a legitimate target for serious questions.  If he entered into the affair, knowing full well the blackmail it opened him up to, what is he all about?  Where have his loyalties resided?

Some starry-eyed people will think asking about this is “impolite,” because, after all, “the man is an American hero.”  Nonsense.

Then we have questions about Petraeus’ potential political career.  The press went after him with all sorts of questions about what he might do in the 2012 election.  The idea was out there.  Could he run for president against Obama?  Could he become the next Eisenhower?

If he had decided to make the move, he would have had a formidable number of supporters.  But he adamantly said no.  Was this a genuine expression of disinterest, or was Petraeus already compromised and under the thumb of the White House?

“All right, David, you’re gone from Afghanistan now.  You’ve retired from the Army.  The hero returns.  Don’t get any ideas about running for president.  You know what we know about you.  By the way, the director of Central Intelligence is open.  How would you like that job?”

“Oh no,” people say.  “This kind of thing would never happen.”

Really?  What kind of world do you think Washington is?  The Peace Corp with martini lunches?  The Unitarian Church with occasional brandies and cigars?

Remember Secretary of State Madeleine Albright’s famous remark when she was asked about the devastation the US was wreaking in Iraq through its economic sanctions?

Albright:  “I think this is a very hard choice, but the price—we think the price is worth it.”

Now that’s the real world of Washington, once the PR people get out of the way.

Blackmail of a famous general, a director of the CIA?  That’s nothing.

A famous general falling under the power of blackmail?  A general who knows some of the deep dark secrets about Dope Inc., the trillion-dollar opium growing operation in Afghanistan, a general whose troops have helped to restore the planting of the poppies there?  A general who knows about the longed-for oil pipeline running through Afghanistan and the various persons whom it will benefit?

Could Petraeus have been a target for all manner of blackmail mounted by numerous parties?

Is the Pope Catholic?