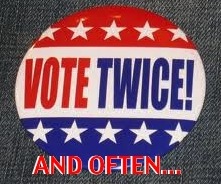 It’s not just George.  All the network poll experts, like Chuck Todd, John King, and Michael Barone would flip out and start punching their sacred touch-screens randomly.  Helplessly.  Furiously.  Looking for proof that this election, like every other election, is honest and above-board and righteous…reflecting the innate popular wisdom of the people, blah-blah.

All major-media number-crunchers have to believe their work is real.  Otherwise, they wouldn’t have any work.  They’re there to convince the public that elections are 99.9999 percent honorable and only paranoids would question them.

So let’s go the scorecard.  We’ll start with the little stuff and work up to the grand finale:

New Black Panthers are back in Philadelphia at voting centers…

Thousands of absentee ballots for the military haven’t come in.

In New Jersey and New York, untold numbers of voters can’t get to polling stations.

Some votes are coming in as emails.

SCTYL, a foreign company, is tabulating and reporting a small percentage of absentee votes.

In Ohio, a key state, eight counties, 16% of the vote, can be easily hacked through the machines.

In Ohio’s Franklin County, the Voter Integrity Project, a vote-monitoring group, has had its status revoked.  Charges and counter-charges of dishonesty are flying.

In Nevada, non-citizens are being pressured to vote by unions.

There are 3020 112-year-olds registered to vote in North Carolina.

Both Republicans ad Democrats were claiming vote-fraud before the polls opened in Pennsylvania.

Also in Pennsylvania, a fake mailer was sent out stating people needed ID to vote.

In Penn., again, Republican registration forms were shredded and thrown away.

This is just the beginning of the reports coming in.

But here is a deeper dagger.  Market Daily News (“Are operatives from both parties systemically committing election fraud?”) cites a Pew Center study which concludes that, nationwide:

One out of every eight voter registrations is inaccurate, out of date, or a duplicate;

And 2.8 million Americans are registered in two or more states;

And 1.8 million registered voters are dead.

While you watch George and Chuck and John and Michael perform their wizardry tonight on their touch-screens, as they report and project and parse and stroke their chins and pontificate and estimate and intone, keep that in mind.

Among other numerous delusions, they see dead people.