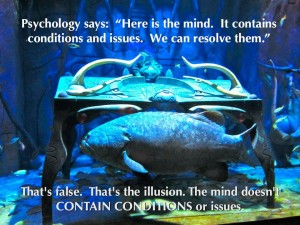 After the Sandy Hook murders, psychology and psychiatry have taken another leap forward in expanding their influence throughout society.  “More mental-health services” is the catch-all phrase our leaders use in “solving” these massacres—along with gun control.

But just as grabbing guns won’t reduce the bulk of gun violence in America, the vague mental-health dictum won’t work, either.

A psychiatrist is a medical doctor who has received special training in diagnosing and prescribing drugs for “mental disorders,” none of which disorders can be confirmed to exist by any test.

A psychologist doesn’t need to be a medical doctor.  With an advanced degree and a license, he can do therapy with patients and try to resolve “mental and emotional issues,” for which no diagnostic tests exist.

From the beginning of the history of psychology, it was really a simple trick.  Establish a loose category called “mental problem,” pour money and research into solving it, and enroll patients.

This approach has become so pervasive that most people can’t conceive of an alternative.  A person is acting strange, he has a problem, and a mental-health practitioner can help him solve it.  What else do we need to know?

Well, for starters, we need to know why the category of “mental problem” is necessary.  Why should we assume it means anything?

Instead, for example: what about people making an inventory of their own deeply held convictions, followed by a self-assessment, to see how well or badly they’re living up to those convictions?

Why did that approach go out the window?

Because it’s based on some sense of responsibility, which is now verboten in a society where “intervening” and “fulfilling needs” are paramount.

If a person can’t or won’t discover what his most deeply held convictions are, what hope does he have?  What problems can he solve that are going to make any great difference?

“Let’s see.  I’m living a life I don’t want, and that life is throwing problems at me.  If I solve the problems, I’ll be okay, right?”

Academic psychology, if you read its history, its textbooks, its methods, has nothing of value or substance to say about a person’s most profound personal convictions.  That’s not on the radar.  It never was.  What you get is sophisticated babble about mental conditions and unresolved issues.

The existence of these issues and conditions is PROMOTED by psychology.  Psychology is a self-fulfilling prophecy: if you assume these conditions actually exist and if you believe they are real, then you can chew on them for ten or 15 years and come up with explanations, answers, and solutions.

Yes, that’s right.  The human being is a very adaptable creature.  If you can insert a primary assumption into his mind, where he accepts it as authentic, he’ll begin to cogitate and calculate around it.

Because the assumption was never his to begin with.  He bought it.  He went for it.  He took the bait.

Now if you consider that millions and millions of people are working on this fake reality, having accepted that they suffer from mental problems, what do you get?

You get a society that, more and more, is paralyzed into inaction.  You get passivity.  You get an overall depletion of energy and power.  You get a victim-club mentality.

Freud picked the “Oedipal Complex” out of a hat.  The incest fantasy.  He made this the foundation of his breakthrough.  He sold it.  He sold it as the underlying trauma and taboo that was always and forever twisting the minds of every male on Earth.  He decided that this fantasy had to be exorcised with years of specialized therapy.

It was a new version of old guilt.  Forget about the Garden of Eden and eating forbidden fruit from the tree.  The incest wish was the real source of human guilt.

Psychology, from Freud forward, quickly became a prison term from which the inhabitant could be released when the therapist determined basic problems had been defeated.

Freud’s opponents and detractors argued for their own version of the correct prison (the basic mental problem).  But the whole underlying notion of “a person captured” needed to come under scrutiny, and of course that never happened, as long as psychologists and psychiatrists ruled the roost.

Psychology became a major force that undermined freedom, the Bill of Rights, and the Constitution in America.  It asserted or implied that no rights or responsibilities meant anything as long as people were chained to their own problems and issues.  This was an argument from Inherent Limitation.  It was persuasive.

From the perspective of psychology, only rubes and Neanderthals would claim freedom was a core fact of existence.  The more educated classes would realize they had to swim through an undersea jungle of their own mental and emotional restraints, guided by a steady professional hand, before they could finally emerge and come to experience the meaning of freedom.

So of course that journey became a self-fulfilling prophecy.

There was one catch.  Most people, after years of therapy, felt no dramatic difference.  This disappointment translated into a deep cynicism about life.  It meant more passivity.

Psychology has not only promoted the existence of mental problems, it has stated that these conditions are rock-bottom facts: there is no way to overcome them, short of talk therapy or psychiatric drugs.  Psychology argues that it is useless to try to “ignore mental conditions.”  That won’t work.  It can’t work.

And if the patient agrees, he can go on to manufacture problems without end.

Whereas, the truth is, every so-called mental or emotional condition is a signal.  It alerts a person that he is heading the ship away from its destination.  He’s experiencing a crisis that has everything to do with the question: WHAT IS MY COURSE IN LIFE?

Finding an answer to that question makes all the difference.

I’ve written about these factors for years.  Understand, however, that, in these cases, what the person is really suffering from is a severe nutritional deficit, or from the toxic overload of the vaccines, drugs, GMOs.  To say it’s a mental problem is to misname what is really going on.  In the same way, saying a person has an irresistible itch when what he really has is poison ivy is a diversion from the main event.

Psychology says:  “Here is the mind.  It contains conditions and issues.  We can resolve them.”

The conditions-hoax is perfectly paralleled by the disorder-hoax of psychiatry.  These are, at the very best, metaphors.  At their worst, they’re intentional ruses.

Here are ACTUAL rock-bottom conditions: freedom, independence, deep and profound desire, the power and energy to fulfill those desires, a sense of what is right and wrong, the wish to see others succeed brilliantly, community, expressing self, creative power, action in the world.

These are loci of decision for every conscious person.

And, as it turns out, psychology came late to the party.  For millennia, humans have been engaging in philosophy and the exploration of spiritual dimensions.

The assumption of “gross limitation caused by internal problems” is a very recent concoction.

The assumption is simply the result of propaganda bought and sold.

When we delete such nonsense, we can discover the kind of personal truth that rings the bell clearly, if we are up to the task.

The rise of psychology was in part fueled by the notion that science could resolve human problems.  But humans aren’t machines; they aren’t closed systems; they aren’t planets moving in fixed orbits.  The analogy doesn’t work.  It fails miserably.

Exploring instead, for example, what the ancient alchemists were really up to, and the original teachers of Tibet who employed the techniques of itinerant adepts from India, gives us a startling perspective on the UNLIMITED human being.

These teachers weren’t, in any meaningful sense, psychologists.  They were philosophers of action.  They were adventurers and explorers.  They didn’t sit in offices dealing with the latest symptoms of people suffering from the malaise of a brainwashed society.

They knew there was a Matrix; they knew it was a heavy blanket of illusion; they knew it both corralled the individual and the community; and they knew it could be dispelled.  It was their mission to make that happen, and they didn’t stint.

Theirs was a heraldic enterprise.  It surpassed, by light years, stirring sand in a childish playpen of therapy.

That heraldic thread of adventure never dies.  It can be stifled at times, but it remains alive under the surface.

Liberating the creative force in a person is the key.  Not through some external and removed and remote process.  The process involves everything you’ve got.

It goes down to the center of the Earth and out to the stars, and beyond.  When so engaged, the mind cooperates and collaborates with the adventurer.  It moves through so-called mental problems like a rocket burning up old paper.

One summer in the 1980s, when I was just starting out as a reporter, I scored a few front-page stories for LA Weekly, because other writers were out of town.  I managed to squeeze in one of the weirder features the Weekly had published up to that time: off-the-record interviews with therapists detailing their private fantasies—all of which turned out to be intensely anti-social.

I later learned the “therapy community in town” didn’t appreciate my approach.

Similarly, I expect some psychologists will rankle at this one.  But the point is, all these fantasies, of both patient and therapist are outcomes of the creative force in action—nothing less or more—and they should be seen that way.

Instead of assigning fantasy A to mental condition A and fantasy B to condition B, why not just throw all the insanity overboard and acknowledge, finally, that what underlies fantasia is the beginning and end of the answer to what’s bothering people and troubling them and driving them into despair and deep boredom:

Imagination and the creative force are tigers waiting to be let out of their cages so they can invent astonishing Futures.

This would be a truly modern psychology and a thoroughly contemporary reflection of what we all know.

From our deepest wellsprings, we:

WORK TO MAKE WHAT WE IMAGINE INTO FACT IN THE WORLD.

Exploring the meaning and action of THIS is a worthy undertaking, and it would happily supersede what has absurdly been called psychology.