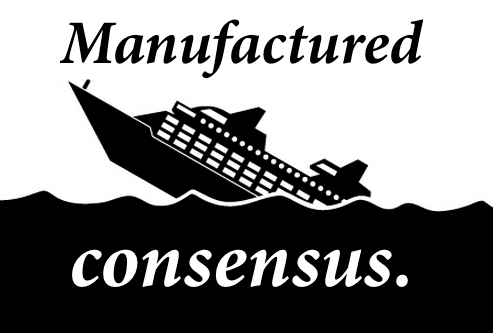 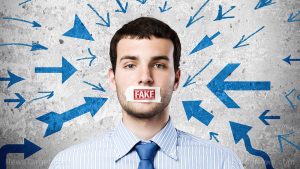 “Science plays a larger and larger role in running the world. But much of it is misleading science, slanted, cooked, biased, stepped on, false, and invented out of thin air.” (The Underground, Jon Rappoport)

In the famous 1988 Noam Chomsky and Edward Herman book, Manufacturing Consent, the authors explore how media distort the news and employ propaganda, in order to bring about consent in the population.

I’ll start with a theoretical example. Let’s say three researchers at a university examine data based on US space shuttle missions, and they conclude that a small set of new conclusions is true. I’ll call this set X.

However, a powerful public agency decides that X is dangerous. X could lead to inquiries about contractors, investigations into cost overruns, missing money, and, worst of all, flawed engineering of the shuttles.

Notice that, in this case, the press isn’t simply distorting the news. It’s announcing that a superior consensus already/suddenly exists among the best scientific minds.

But at this point, all relevant scientists get the message: keep quiet, don’t debate for another moment; otherwise grant monies will vanish, demotions will occur, peers will lay on heavy criticism, excommunication from The Club will follow.

So these scientists do keep quiet—and NOW a consensus among them comes into being, by implied threat and coercion.

This is basically what happened in the arena of energy-production via cold fusion. Wikipedia adequately summarizes the superficial situation: “The most famous cold fusion claims were made by Stanley Pons and Martin Fleischmann in 1989. After a brief period of interest by the wider scientific community, their reports were called into question by nuclear physicists.”

A superior consensus was invented, despite the fact that many scientists were intensely interested in the Pons/Fleishmann findings. Some of these scientists tried, in vain, to point out that failed efforts to reproduce those findings resulted because researchers were altering Pons and Fleishman’s methods.

No dice. Cold fusion was labeled a giant error and even a fraud. The official door was closed. THEN a consensus hardened—through coercion and intimidation.

In my research leading up to the publication of my first book, AIDS INC., in 1988, I reviewed the period of the early 1980s, when many researchers were coming at the question of the cause(s) of AIDS from different angles. But then, suddenly, in the spring of 1984, the US government officially announced, at a televised press conference, that a virus called HTLV-III (HIV) was the cause.

The science was shoddy, to put it mildly. It was bad science and no science. There was no single published paper that meticulously laid out proof of HIV as the cause of AIDS. But no matter. Overnight, all the monies that had gone into discovering what caused AIDS were diverted into the question: How does HIV cause AIDS? Any scientist who failed to see the handwriting on the wall was shoved out into the cold.

Predatory corporations, who spray poisonous pesticides all over the world and cause birth defects, need special protection and cover? Public health agencies that recommend giving vaccines to pregnant women, and increase the risk of babies born with defects? Solution: invent, overnight, and broadcast, a consensus that a basically harmless virus is the cause of those tragic birth defects.

I can assure you there are many scientists who don’t, for a second, believe the Zika virus is such an agent of destruction. But they have kept their mouths shut, and have chosen to roll with the tide.

However, that tide is turning, in many arenas of science. Journalists and researchers with no allegiance to official bodies have emerged.

Without realizing it, the press is committing professional suicide. An article that was once headlined, “Three dead horses found in a field,” has become, “Scientists agree that the three dead horses were an unconnected coincidence.” And people are laughing the press out of court.

But the film features a long-time researcher at the Centers for Disease Control, who confesses that he and colleagues falsified a 2004 study in order to exonerate such a vaccine, the MMR, which does increase the risk of autism.

One of the film’s subjects is false consensus.

The CDC researcher and whistleblower, William Thompson, essentially said: I was part of the fake consensus. Don’t you get it? I was a card-carrying member of the club that invents fake consensus. And now I’m telling you that.

Bottom line: the media are collapsing into their own swamp.

The swamp they manufacture.

For decades, the press, government agencies, the UN, and a whole host of think-tank, foundation, university players, and financiers have been fronting for a consensus which they falsely claim is already established: planned societies.

They frame this consensus as technology/science—as if science itself dictates that the future must consist of interlocked organizations which insert citizens into slots. Slots where they live, where they work, where they socialize.

This has the flavor of science, but on reflection, not the substance. “We can make the top-down organization of society look scientific, as if we’re following physical laws. We can sell this as science.”

Really? Is a chart detailing how thousands of slaves will transport huge blocks of stone to chosen sites, where monuments will be built, scientific? Of course not.

In the modern world, this fakery is called technocracy. Technocracy may employ methods such as technological surveillance, but the overriding plan for organizing society has nothing to do with science. It has to do with control.

And when you see it that way, the supposed consensus falls apart.

Who wants to live in an assigned slot “for the greater good?”

Up close and personal, who wants to give up his freedom?

And it too was promoted as an already-existing consensus among the wisest and the best and the brightest.