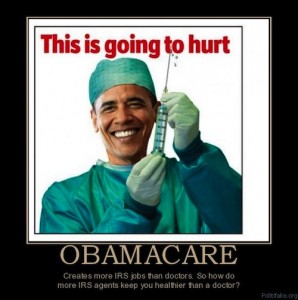 Ask yourself this question: if you’re forced to buy a product, will the seller also want to make sure you use it?

The first part of the question is called a clue.  Who forces you to buy a product?  What kind of person or group?

Forced purchase and forced use go hand in hand.

So it will be, some day, with Obamacare.

Up the road, when the program really gets going, this means: take your psychiatric drugs after your diagnosis of clinical depression; submit to the installation of a pacemaker, whether you want it or not; hand your children over to the doctor so he can shoot them 60 times with vaccines.

We can already see the outline forming.

“…They [the “home visitors”] work with families to evaluate their circumstances, help parents gain the skills they need to succeed in promoting healthy development in their children, and connect families to the kinds of help that can make a real difference in a child’s health, development, and ability to learn…improving the rate at which children reach developmental milestones…”

This is just the beginning.

What are the odds that, during one of these home visits, the nurse or social worker inquires about the child’s vaccine status?  Are all his shots up to date?

“No??  My, my.  What seems to be the problem here?  You know, we look into all forms of child abuse, and not getting vaccines is on the list.  Do you understand?”

And if the parent says, “Well, we don’t believe vaccines are safe.  We don’t want our child to suffer possible damage…”

The social worker nods and says, “I see.  So you’re anti-government then.  Does anyone in the house own a gun?”

And you’re off to the races.

Here’s the kicker.  Millions of people across America, who have been sufficiently brainwashed, will agree with the social worker.  Including people in your own community.

“They don’t vaccinate?  My God.  And the father owns two guns?  I always thought he was a little strange.  I’m glad we found out what’s going on at that house before something terrible happened.  I mean, those kids play with our kids!”

Welcome to the show.

At some point in the future, this whole unfortunate scenario will be avoided by simply making all childhood vaccines mandatory under the Obamacare program.

They force you to buy the product.  They insist you use it.  Makes perfect sense.

“Oh yes, these home visits used to be by agreement of all parties, but now there’s a new rule.  To avoid endless red tape, and to be able to utilize the information we collect on citizens, we pick the homes and we make the visit.  Do you have a problem with that?  If so, you enter a new category called RESISTANT.  At which point, everything stops and we invoke a whole different set of procedures.”

“Congratulations.  What’s the due date?  Who’s your doctor?  What hospital will you be staying at?…..Excuse me?  Home birth?  Midwife?  Charlie, call the bomb squad and the hazmat team.  Institute a search for nuclear weapons.”

Silly parents.  You thought it was your family.  You thought you had a wide range of choices.  No.  You see, you bought the product they forced you to buy.  The product just happens to come with a whole raft of additional features.

Don’t worry.  Be happy.  Use the features.  Enjoy them and their fallout.

I’d be remiss if I didn’t mention a particularly thorny category you could fall under: the person “who does his own medical research.”

Up the road somewhere in the future, show your knowledge to an Obamacare rep: “Say, Nurse, did you know that every year in the US, hundreds of thousands of people who are diagnosed with flu have their blood samples sent to labs—and only 16% show any sign of a flu virus?  All the others don’t have the flu at all.  Therefore, no flu vaccine could conceivably work on the 84%.”

You’ll find yourself sitting across from a psychiatrist who says, “You’re showing symptoms of IRS, Independent Research Syndrome…”

I’m fully aware there are people who are steadfast in their belief that “it can’t happen here in America.”  They only think about today.  For them, the future is non-existent.

But think about this:

Sixty years ago, what would people have said if you told them, “By the year 2013, five million children in America will be taking speed, because they sit in class and stare out the window and fidget in their seats.  Doctors will prescribe the speed.  They’ll call the fidgeting ADHD.  There will be no lab test to diagnose it.  No physical test of any kind…”

Sixty years ago, what would people have said if you told them, “By the year 2013, medical experts will claim 20% of the population is suffering from depression.  The psychiatric profession will have its own bible, and it will list 300 separate and distinct mental disorders.”

Or this: “By the year 2013, psychiatrists will be seeding the whole American population with drugs for depression, and these drugs will cause people to commit suicide and murder…”

Or this: “By the year 2013, based on a grossly over-exaggerated risk for breast cancer, women will be walking into doctors; offices and asking to have both breasts removed.”

It already has happened.