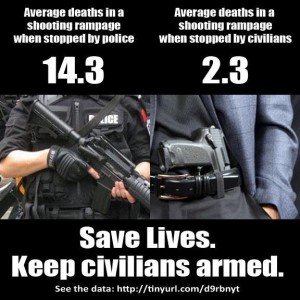 A home.  Somebody at the door.

Man breaks into the house.

Husband and wife have “altercation” with the man.

Both husband and wife have guns.

They both shoot the man.  He dies.

No prosecution, no problem.

But the forced introduction of this new culture doesn’t produce a single ripple or question in the Hot Sulphur Springs home-invasion shooting.

The wife is a Colorado deputy district attorney and her husband is a sheriff’s deputy.

They can shoot a home intruder and no one uses that incident to bray and whine about armed citizens killing criminals.  They can get paid leave from work and everybody immediately understands.

That’s called a clue.  A clue about where this new gun culture is really heading.  As if we didn’t know.  Cops and law-enforcement personnel, along with criminals, will have all the guns.  Everybody else will have a wooden spoon from the kitchen drawer and a bowl of custard.

Imagine what would have happened if the Hot Sulphur Springs couple had been private citizens, civilians.

“Police are measuring the exact distance from the front door, to see how far the intruder moved into the living room before he was mowed down.”

“Police are checking to see where the couple purchased their weapons.”

“Questions are being raised about the ‘altercation’ that took place before shots were fired.  How serious or threatening was it?”

Did the intruder say ‘give me your money or I’ll kill you,’ or did he say ‘say something funny or I’ll bill you.’

“Was the intruder armed?  If not, was he killed in cold blood?”

“Gun control groups today offered the following advice: allow the intruder to take all your possessions.  Don’t engage in an argument, even if you’re trained to fire a gun.  It’s too risky.”

“Assume a fetal position, and if you’re a person of faith, pray.  Some studies show that prayer can work miracles.”

“A smile can turn a rainy day into sunshine.”

You should have gone into law-enforcement.  Then you would have had the absolute right, when off-duty, to blow away a home invader.  Isn’t that the real lesson here?

But if you’re standing in your living room at midnight facing a person who may want to kill you, and you’re just a civilian, you need to process, in a second, the chances that, if you shoot the intruder, you’ll be raked over hot coals by investigators.  You have to balance being charged with a very serious felony against the advantage of protecting yourself and your family.

And in the new gun culture, you have to come up with the right answer before you die.

But hey.  Not to worry.  Even if you do die, you can know you’re contributing to a better world.  A world in which peace will ultimately reign.  Isn’t that worth your life?

All will be well.  Police and criminals will wage their war and, in the long run, the police will win.  Then there will be no more crime, ever.  Future generations will be safe.  Citizens will obey.  They will do exactly what they’re told.

If a huge tank comes at them in the street, they will lie down in front of it, not as a sign of protest, but in the spirit of compliance.  The State must be right.  The State is always right.

See?  These questions aren’t hard to solve, not when you stop and think about them.