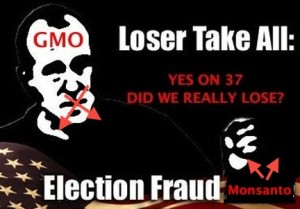 The verdict is in.  You would be a fool to accept the vote-count in the California Prop 37 election.  I’ll show you why.

Apparently, the CA secretary of state’s office has been getting hit by a lot of calls.  People are asking them about the ongoing Prop 37 vote-count.  As of last night, there were still 2,304,250 votes uncounted.

I received a call from Shannan Velayas, who works in media relations at the California Secretary of State’s office.  She left a message, emphasizing several points.

Among them: The vote-count is open and transparent, and anyone from the public can observe it.

This fact has been used by reporters and “experts” to assure the public that an election can’t be stolen.

So the first reason you shouldn’t believe the Prop 37 vote?  The means do, in fact, exist to steal an election.

Here is my challenge.  Can I see how the touch-screen voting machines operate?  Can I go inside them and check them for tampering, anywhere in the state of California?

Can I see exactly how information flows from each voting machine to successive computers?  Can I check to make sure the flow of information is not being intercepted and changed?

Can I get inside any of the main-frame computers that collect vote-numbers and examine their software, source-code, and working parts?

Of course, the answer to all these questions is no.

Therefore, I could hire an army of observers, and they would not be able to tell me that the vote-count was done correctly.  The secretary of state couldn’t swear to it either.

Some brain-deficient people think these objections are over the top.  They think I’m nitpicking.

If I remind them that a team of computer scientists from Michigan went to Washington DC and demonstrated that they could hack into the voting system and reverse the result of mayoral race there, these brain-deficient people would dismiss that as irrelevant, too.

I suggest watching the documentary Hacking Democracy, directed by Simon Ardizzone and Russell Michaels, starring Bev Harris.  Then tell me elections can’t be hacked and reversed.

Remember Jonathan James, who at the age of 16 put a back-door into DOD’s Defense Threat Reduction Agency’s server, and stole software from NASA computers that set temperature and humidity at the International Space Station?

Recall Adrian Lamo, who hacked into security systems at B of A, Citigroup, and Cingular?

Keven Poulsen, who hacked into federal computers that record wiretaps?

Tsuromu Shimura, who used a simple cell phone to to hack into phone calls all over Capitol Hill?

The 18-year-old Greek boy, “n-splitter,” who was arrested for hacking into systems at Interpol, the Pentagon, the FBI, and the NSA?

I won’t even bother mentioning hackers who are hired by the NSA and other agencies.

But no, the 2012 California Prop 37 election couldn’t have been hacked.  Of course not.  Those computer systems are absolutely impregnable.  They’re programmed by advanced ETs from the Rainbow Galaxy.

The media and secretaries of state throw out rhetoric aimed at assuring the public that elections are fair and square.  That’s their job.

Pollsters and those hilarious clowns like Chuck Todd (NBC), John King (CNN), Michael Barone (The Examiner), Karl Rove, and Dick Morris are making a living from doing analysis and predictions of elections.  They would defend, to the death, the honesty of elections.  Of course they would, because if the opposite were shown to be true, they would be out of work.

The Associated Press feeds projections, although they deny it, to media outlets all over America on election night.  They, too, would look ridiculous if it turned out that vote-counts had been hijacked.

Then we have professionals who work for candidates and ballot measures and offer their projections to their clients.  They, of course, assume all elections are fair and square, because if that weren’t so, they would look like fools.

Worse than fools.  Right now, professionals are telling the YES ON 37 people their cause is lost.  If they’re wrong, if the election has been electronically stolen, they are giving their clients monumentally bad and destructive advice.

Even though every single ballot, whether touch-screen or paper, is eventually turned into a digital record, nothing can go wrong.

I’m saving the best for last.

In 2007, the secretary of state of CA ordered a “Top-to-Bottom Review” of all electronic voting systems currently in use in California elections.

In other words, up to that time, these systems had been considered a very fine way to run the vote count.  The systems obviously had been tested and re-tested and checked and approved.  They were already being used in the state of California.

The first three systems were disqualified from further use…and then conditionally re-approved, presumably after fixes were done.  The fourth system was rejected altogether on Aug. 3, 2007.

What, indeed, does that say about those elections in which these flawed systems had been used?

To suppose that, after this top-to-bottom review in 2007, everything was fixed and perfected is a leap only the foolish and unwary would take—particularly when we are talking about extremely talented hackers who could be employed to change election votes.

You can read the top-to-bottom review here.

Be sure to go through the comments section at the end.  It contains some explosive remarks.  For example, there is a discussion of vendors pretending to sell certain voting machines to the state of California…but actually selling other machines…machines that were not certified for use.

Another comment indicates that California lacked a method to ensure the source code for voting-machine software actually belonged to software certified by the state.

Reason Two: The networks made an early, premature, and highly suspect call of defeat for Prop 37 on election night.  Roughly six million votes were outstanding at the time, and Prop 37 was coming back from a huge deficit, which had been created by the early vote-count.  (Where exactly did those early votes come from?)

Reason Three: The enemy in the Prop 37 campaign was Monsanto and its allies.  If Monsanto is ready, willing, and able to patent all foods on the planet and own the food supply, choke populations with its pesticides, and enable the sale of nutrient-deficient GMO food to billions of people, only a moron would refuse to believe it would corrupt an election.

Reason Four: The NO on 37 forces lied consistently in their ads running up to the election.  They lied in the California Voter’s Guide, which is a felony.  They used the seal of the FDA in those ads, which is another felony.  Given the opportunity, what else would they have done?

Reason Five:  A few days before the election, YES ON 37 held a press conference, during which they were mercilessly attacked by mainstream reporters on an entirely irrelevant issue: did the FBI actually open an investigation of NO ON 37, or was it an inquiry or a mild expression of interest?  YES ON 37, in the press conference, was exposing the particulars of NO ON 37’s lies and crimes, but the reporters didn’t care at all.  In the next few days, their stories instead turned the tables on YES ON 37 for “erroneously” suggesting that DOJ was “investigating” NO ON 37.  This had all the signs of a coordinated media torpedo.  It made YES ON 37 look like a bunch of “sour grapes” losers.

Reason Six:  NO ON 37 stealing the FDA seal in its ads?  Surrendering its own responsibility, DOJ  referred the matter of the stolen FDA seal to the FDA for adjudication.  This is cause for investigating the DOJ itself.  The FDA has nothing to do with deciding what action should be taken against NO ON 37.  The FDA deals with food and drugs, not misappropriated federal-agency seals.  The DOJ effectively shelved any action until after the election.  The DOJ prevented a public outcry against NO ON 37.

Reason Seven: The DOJ operates under the authority of the president of the United States.  Barack Obama is the most powerful supporter of Monsanto in America.

For these reasons, the most careful scrutiny possible must be applied to the past, present, and future vote-count on Prop 37, including the now 2,304,250 outstanding votes.

Demands must be made to undertake a complete review—an independent review—of all electronic voting procedures in the state of California.

And then, in full view of the public and the press, the most talented hackers on the planet must be offered a chance to hack into the California vote and steal an election.

“We lost” is not a credible comeback to that.