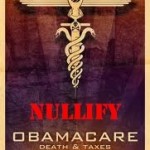 “Affordable…together,” the two primary propaganda messages of Obamacare, and a phrase which might be the new Pledge of Allegiance, aren’t cutting it.

Sebelius said, “The majority of people calling for me to resign, I would say, are people I don’t work for and who do not want this program [Obamacare] to work in the first place.”

As head of the Dept. of Health and Human Services, she works for her boss, the President, who is supposed to work for the American people, but doesn’t.

No president works for the American people.  If he did, he would risk life and limb to expose the criminals who really run this country.

A machine requires a designer and operators, but once it gathers momentum, it moves on its own.  It advances across the landscape like a programmed robot, spouting homilies.

Deep in its guts, the command is: Invent reality for the masses and enforce it.

Healthcare.gov, the site that enrolls people in Obamacare, is one of those moments where a sub-sub reality-program of the robot fails and crashes.

But backing up from it for better perspective, we can see that failures, crashes, and scandals are built into the overall reality-invention program, to engender chaos.

Chaos is an opportunity for the robot to bring in greater control to “restore security.”

And if we were to gain even greater distance from all this, we would see that, at a much deeper level, millions and millions of people want to offload the machine altogether.

Millions and millions of people want to end lives of automatic function, because they know that life can be so much more.

In the robot, they see themselves surrendering, and they don’t like the view.

They want a story and a future that supersedes the robot.

They want health, not sickness-care.  They want choices, not orders from above.  They want open space, not the claustrophobia of regulations.  They want energy, not obedience.  They want the open sky of their own imagination, not one program after another.  They want freedom, not fascist geometry.