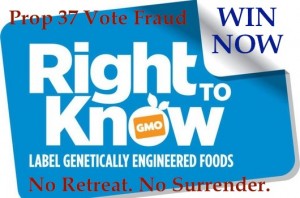 An email written and sent to me by Natalia Lee Gardener has offered a basic strategy for winning Prop 37, even at this late date. (chakra.yoga.bridge@gmail.com)

Of course, it will take some persistence and a few smarts.  I’m sure the lawyers who worked for the YES ON 37 campaign have thought of it.

Another felony? Misappropriating the FDA seal and using it in their ads below a statement they falsely claimed was made by the FDA.

NO ON 37 was lying front to back.  Read all about it here:

Therefore, the election should be overturned.  Voters were defrauded by false information.  Votes were made against 37 based on lies spread by the NO ON 37 campaign.

A new special election should be held.

I know what you’re going to say.  “If every election filled with lying statements were overturned, we’d be re-voting for every job from president to dog-catcher from now until the sun burns out.”

Perhaps.  But let’s focus on the Prop 37 election.

The strategy of YES ON 37 is: let’s move on to other states and other ballots; we educated a whole lot of people in California; let’s take our fight elsewhere now.

Who says you can’t do two things at once?  Go ahead to Washington state and mount a new GMO labeling campaign.  But your lawyers?  They can launch a legal campaign here in CA.

As Gardener pointed out to me in her email, chiropractors engaged in a long hard battle to gain proper recognition.  They went all the way to the Supreme Court.  They fought against very heavy odds.  They played hardball.  They won.

So why can’t the GMO-labeling forces do that?

And if they lose in court?  They make a lot of noise and they appeal.  They stir the pot.  If the appeal loses, they appeal higher.  They make a big deal out of this because it is a big deal.  They kick ass.  They act tough because they are tough.  If they are.

I can’t tell you how many times important health-freedom issues have been lost because the people leading the good guys folded up their tents and walked away.

Why play nice with criminals?  Why?

Being an idealist doesn’t rule out going into battle.

The issue is clear.  The NO ON 37 forces committed fraud and felonies in their campaign.  Therefore, many people voted against 37 because they bought the fraud and didn’t recognize the crimes. Therefore, we need a new Prop 37 election.

These are all lies.  But because you believe this guy, you buy the medicine.  Then later, you find out he was lying wall to wall.  So you take him to court.

Let me defuse another argument.  It goes this way: “We’re succeeding.  We’ve educated millions of people in CA about GMO labeling.  Let’s build on that momentum and take the fight to other states and other ballot measures.  If we suddenly challenge the Prop 37 election in a CA court and make a big stink about it, if we act nasty, we’ll drive away people in other states who would be on our side…”

Yeah, well, this makes no sense at all.  Did millions of angry people in the streets during the Vietnam war have anything at all to do with ending that war?  Should they have stayed home and eaten organic candy bars?

If the YES ON 37 lawyers show people everywhere they won’t back down from a fight, that they’ll take this all the way, they’ll gain allies.  They’ll wake people up.  They’ll add a new dimension to this war.  A good dimension.

Forget all the pseudo-mystical nonsense about being nice and the universe being nice right back to you, or whatever it is that keeps people in a state of internally imposed slavery.  A) The universe doesn’t work that way and b) it’s just an excuse to stay passive.  In other words, it’s pure bullshit.

Forget the legal niceties and hair splitting over what the CA election law says about what constitutes fraud.  Forget some carefully reasoned argument about why YES ON 37 stands no chance in court challenging the election.

That’s not the point.  Don’t be a moron.

The point is what’s right and what’s true and what justice is.

Double down on the Prop 37 election.

USE the fraud to score victories.

If I’m reading the tea leaves correctly, the lawyers connected to YES ON 37 don’t want this fight.  They absolutely don’t want it.  (Joe Sandler, Andrew Kimbrell)  But I believe some other lawyer can step up on behalf of the voters of CA and gain standing and go to court.  How about you, Gerry Spencer?  Or do we need Bill Kunstler to rise out of his grave and start raising hell?

In 1982, I interviewed Bill Perry, who was the chief PR man for Lawrence Livermore Labs, where they design nuclear weapons.  Bill told me the nuclear freeze campaign, which was getting off the ground, wasn’t an issue for him…until one day he saw that the protesters at the Lab fence came from all walks of life.

They were hippies, guys in suits, housewives, lawyers, doctors, office workers, long hairs, short hairs, no hairs.  Then, he said, he knew he was on the wrong side.

That’s what the GMO issue can be.  People from everywhere, all kinds of different people, standing together on this issue.  When that is reflected on television and computer screens, then others will realize it’s a universal situation.